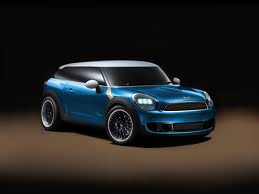 The Mini Paceman is a lot like its predecessor the Mini Countryman. In fact, most people have started to call the Paceman the less ugly version of the Countryman. For folk like me who didn’t really think that the Countryman was ugly that comparison is merely a compliment.

It is intended to have most of the features of the Countryman as well. This means that it will drive well and have a lot of power under the hood. The Paceman is a 2 door version coupe which has a 2.0 liter 143 horsepower diesel engine and an 184bhp 1.6 liter inline four cylinder petrol engines in 6 speed transmissions, all wheel drive offered in both automatic and manual modes.

Since there are two seats missing from the back the Paceman has a good size boot making the Paceman qualify as a sports activity coupe. The power steering and safety features are standard as always though the price may be a deterrent for many.