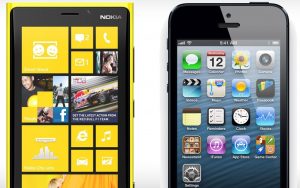 Let’s start by looks: This is one where personal opinion could play a very important role. But more or less the Nokia Lumia 920 does seem to have the upper hand since it is sleeker and definitely easier on the eye. However, it is also said to weigh more than the iPhone 5 which may be a problem.

On features it seems that the Nokia Lumia 920 has given a detailed point by point reply to Apple. It has a better display technology than the iPhone 5. The display screen is larger and resolution better than the Apple counterparts.

How these gadgets do in the market remains to be seen.