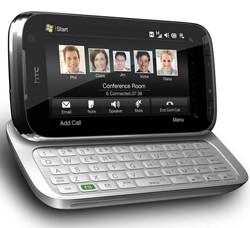 HTC Mobile and AT&T have announced that the Aria is a powerful addition to their Android Smartphone line. Measuring only 4.1 x 2.3 x 0.46 inches and having a weigh of 3.8 ounces, it really is a tightly packed slick little thing.

The rear is matte black which rejects fingerprints and is easy to slide in or out of the typical denim pocket. It comes equipped with a 5 megapixel digital camera, a 3.2 inch HVGA display and an easy to carry design; it certainly has a lot going for it. It comes with the 3G speed, touch screen an optical joystick which makes the HTC Aria a very handy Smartphone for a broadband mobile.

If looks are anything to go by, then this phone has a lot going for it. It is Wi-Fi capable and is compatible with AT&T High Speed Packet Access 7.2 Mbps technology. This technology of the future provides boost to 3G speeds when used in conjunction with expanded backhaul. The quicker wireless networks, Smartphone’s like this one and the inventive mobile apps gives AT&T customers everything from social networking, to business applications to videos and music.

Although a solid good quality camera, with excellent call quality and data speeds it does have its’ short comings. First and foremost is the lack of an LED flash, what were they thinking of anyway? Even the cheapest and oldest models have a flash! Then the battery is really poor and you can’t install applications that are not approved; meaning if you download an app from the web, or have one emailed you can forget about putting it on your SD card, you simply cannot install an app from an unknown source.

Then there is the 480 x 320 resolution which is just not too comfortable when taken outdoors. What’s more you will be paying $129.99 for a two year plan with AT&T. Maybe the right buyer won’t mind its’ shortcomings but with the market full of newest gadgets, and competition being what it is, I’m not sure that this is the best buy around.