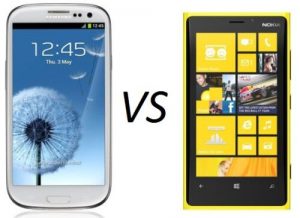 The gadget market is abuzz with excitement with the competition between two phones i.e. Samsung Galaxy S3 and Nokia Lumia 920. The Galaxy S3 has a slight advantage given the fact that it already has been launched and has created its customer base in the market.

Nokia Lumia 920 operates on Windows 8 operating system and has a number of features that will make it attractive for those looking to buy a new phone. First off it is a sleek looking device that is likely to attract a lot of attention given its looks. Moreover, if you’re really not that into apps then the Nokia Lumia 920 has a lot to offer given that it uses Windows 8.

The Galaxy S3 has an expandable storage while the Nokia Lumia 920 has a fixed internal memory. The S3 also has a removable battery which makes it quite a handy device while the Lumia 920 does not have this feature.

So which would you choose?